“The theme of the picture By The Law is alien to our viewer in script and essence. Considering the instances of pathology and hysteria [in the film], it is a sick phenomenon in our cinematography which harmfully affects our Soviet screen.” — A.R.K. (Association of Revolutionary Cinematography), 1926.

“We may be accused of being morbid or misanthropic, but please do not forget that our film is about the modern English middle class–surely the most inhuman of all.” — Lev Kuleshov, 1926. 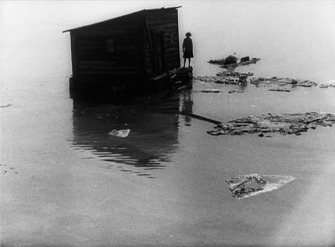 It is strange when a 92-year-old Soviet film can say so much about the contemporary world. Class violence, retribution, environmental chaos–all are active ingredients in Lev Kuleshov’s “constructivist Western” By The Law (Po Zakonu). Viewing it today, from what some geologists are calling the Great Acceleration period of the Anthropocene, is like peeking into a creepy apocalyptic window of past and future. Like Marx, the Soviets believed that capitalism would destroy humanity; and lo and behold, here we are, on the way to our own Easter-Island party, with investors buying up escape-pod properties in New Zealand to ensure that this model survives for their entrepreneurial offspring, who will presumably sell shares in the Norwegian Seed Vault.  /communist_rant

The coming of Russian film coincided with the creation of the U.S.S.R., the world’s first modern worker state. It provided the opportunity for a clean break from the literature and drama of the 19th-century, both of which the Soviet intellectuals rejected as bourgeois tools of domination controlled by the aristocracy. With 80% of the Russian population illiterate, it was believed that this new visual medium would usher in a transformative era of avant-garde modernity, offering a conduit through which the nascent nation could educate and galvanize the people. Like rail lines and power grids, film would connect the disparate corners of the Soviet together. It would create social cohesion between ethnic groups and help authorities overcome the huge communication hurdles of time and space.

But things got weird. The period of genuine openness and experimentation was over fast and in steep decline after Lenin’s death. Anything avant-garde suddenly became elite, epicurean and subject to suspicion. Film plots were required to be both entertaining (without being “too American”) and reflect deeper socialist worldviews, a concept called Socialist Realism. Many in the industry, particularly directors, screenwriters, and cinematographers, struggled between these two worlds. Their continued employment and access to funding meant keeping the cultural commissars satisfied with works that met this criteria. As if it wasn’t hard enough making wheat quota subplots stimulating, the films should also be exportable abroad and appeal to international audiences.

It was within this confused climate that the Kuleshov Collective, a close-knit group of actors and technicians started by director Lev Kuleshov, set to work on a new project in 1926. (Kuleshov pioneered several techniques of early film montage theory that today would be taken for granted; one is called the Kuleshov Effect, which asserted that one shot placed beside a second can alter a human’s emotional interpretation.) The Collective’s biggest success thus far had been in 1924, with the brilliant satirical comedy The Adventures of Mr. West in the Land of the Bolsheviks, which lampooned both American and Soviet stereotypes equally. But the group was now on shaky ground after its disastrous follow-up, when a long and confusing sci-fi film called The Death Ray was thoroughly hated by everyone. Kuleshov knew that the collective’s next project had to come in on the cheap and be a hit. While it would have been easy to fall back on the safety of West’s comedic formula, he happened across a gloomy story by American socialist writer Jack London called “The Unexpected” and decided to adapt it with screenwriter Victor Shklovsky. Finishing the script in 12 hours, they started scouting locations outside Moscow that could serve as the Yukon. They spotted the “huge and forlorn” pine tree first, near the Tsaritsino ponds. Then the Collective built a small shack on the banks of the icy Moskva River. The majority of the film would be just three actors inside this claustrophobic interior. It would be the cheapest Russian production of all time. 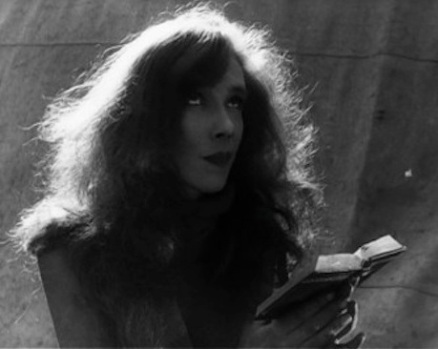 Ultimately, it’s the performances of Aleksandra Khokhlova (as Edith) and Vladimir Fogel (as Dennin) that make By The Law so exceptional. Aleksandra Khokhlova was Kuleshov’s spouse and creative partner. Like the others in the Collective, she had starred in most of his previous films; but unlike the men, she was mercilessly mocked and insulted by critics for her angular looks and skinniness. Lev Kuleshov hit back, saying “The commercial pursuit of beauties and names is none other than hidden pornography or psycho-pathology for which there is absolutely no place in Soviet cinematography.” The best English write-up of the film belongs to American poet Hilda Doolittle, better known as “H.D.”, in the 1928 issue of the film journal Close-Up. Watching the German version Söhne in a Switzerland theater, she described Khokhlova’s performance:

The gestures of this woman are angular, bird-like, claw-like, skeleton-like and hideous. She has a way of standing against a sky line that makes a hieroglyph, that spells almost visibly some message of cryptic symbolism. Her gestures are magnificent. If this is Russian, then I am Russian. Beauty is too facile a word to describe this; this woman is a sort of bleak young sorceress…Her face can be termed beautiful in the same way that dawn can be termed beautiful rising across stench and fever of battle…This sort of raw picked beauty must of necessity destroy the wax and candy-box “realism” of the so much so-called film art. It must destroy in fact so much that perhaps it does “go”, as one of our party said, “too far”.

This notion of “too far”-ness echoes a similar comment made by Cinema Front critic Viktor Pertsov, as noted by scholar Denise Youngblood in her Soviet Cinema in the Silent Era 1918-1935. Pertsov criticized Kuleshov for not guiding the viewer to moral judgment or providing a social key with which to decode the film, which he described as “hermetically sealed.” While meant negatively, today this hermetic sealing is precisely what makes this movie so radically accessible to new viewers. Unlike other Russian films from the period, it ties itself to no historical event or revolutionary act but merely works its way through its own myopic microcosm of greed and madness, close-up by close-up, breakdown by breakdown.

Kuleshov was known for making dangerous physical demands on his actors, although the confined interior of By The Law theoretically made for safer working conditions. The shoot was carefully timed to overlap with a spring thaw and flood event. Actors would freeze, be submerged, and have off-screen airplane propellers blow snow and sleet into their faces. Kuleshov described the expereince in Fifty Years In Films:

Spring came, the ice on the river broke. We went on shooting, but suddenly it became apparent that we were having quite an unusual flood: the river water was inundating the cabin, its level steadily rising. The wet cables produced electric shocks whenever one inadvertently touched them, but Khokhlova affirmed that “electricity made her feel more intensely”. While a close shot was being made, Fogel lay bound on ice in the fire-hose rain and airplane wind for two and a half hours. (p.228-229)

Vladimir Fogel was better known for his comedic roles in hit films like Chess Fever, where his neurotic performance shows his gift for physical comedy. But today, it is his portrayal of the exploited and embittered Irishman in By The Law that stands as his highest achievement. Kuleshov wanted extreme states of being from the faces of his actors. This is why the Collective practiced incessantly using still photographs and études, trying to move beyond the cliched facial expressions so common to the stage. Truly extreme states of being, they believed, could never be attained through psychological immersion. In that sense, they rejected theater theorist Stanislavski’s approach as a mere dressing-up of canned Victorian melodrama. Actors were mechanical beings subject to the laws of science. Ana Olenina summarizes this well in her article “Engineering Performance: Lev Kuleshov, Soviet Reflexology, and Labor Efficiency Studies”:

Kuleshov’s explorations were driven by his conviction that the performer must exploit the abilities of his or her body to the maximum extent and create corporeal spectacles that would strike the audience with their unusualness, dynamism, and perfection in every detail. Thus, the acting études and films created by Kuleshov’s troupe in the 1920s were marked by a clear tendency on the one hand, toward tragicomic grotesque and buffoonery, and on the other hand, toward extreme physical performances (p.300).

Although the end product was criticized for its “Americanism,” it was a big enough hit to prove the end of the Kuleshov Collective, as Fogel and others departed for the stable paychecks offered by the larger Soviet film factories. Fogel would soon play the proletariat couchsurfing homewrecker in Bed & Sofa, followed by The House on Trubnaya. Tragically, he killed himself in 1929, although likely not for the reasons stated by Kuleshov in his memoirs (because of “uninteresting work”). On the other hand, his suicide did coincide with the coming of sound film, a difficult time for all actors but especially international ones. Aleksandra Khokhlova, failing to meet Soviet beauty standards, could only get work in Kuleshov projects. Soon, she would turn to directing films herself, including an adaptation of Maxim Gorky’s An Affair of the Clasps (1929), Sasha (1930), and a documentary called Toys (1931).

In closing, the score of this particular DVD restoration deserves mention. The majority of silent films have no remaining soundtrack notes with regard to what should be played during a screening. This is true for By The Law. Most restorations go the safe route and commission a solo piano score, or something orchestral from the time period that fits. Luckily, the Austrian Film Museum decided something different was needed and went with electronic composer Franz Reisecker, who had previously worked on a score for Eisenstein’s Battleship Potemkin restoration. His dissonant and fractured tones work brilliantly alongside Kuleshov’s images. “I was fascinated with actress Aleksandra Khokhlova, because of her very particular expressive style, and then with the montage and Kuleshov’s highly artificial visual language,” Reisecker said in an interview. “It reminded me of Spaghetti Westerns. I went back to Ennio Morricone’s music for Sergio Leone’s films and developed some sounds based on the bell motif. Then there is a sequence that almost has the character of a dance track when they find gold…and despite the groove there is a hint of threat in the sound.”